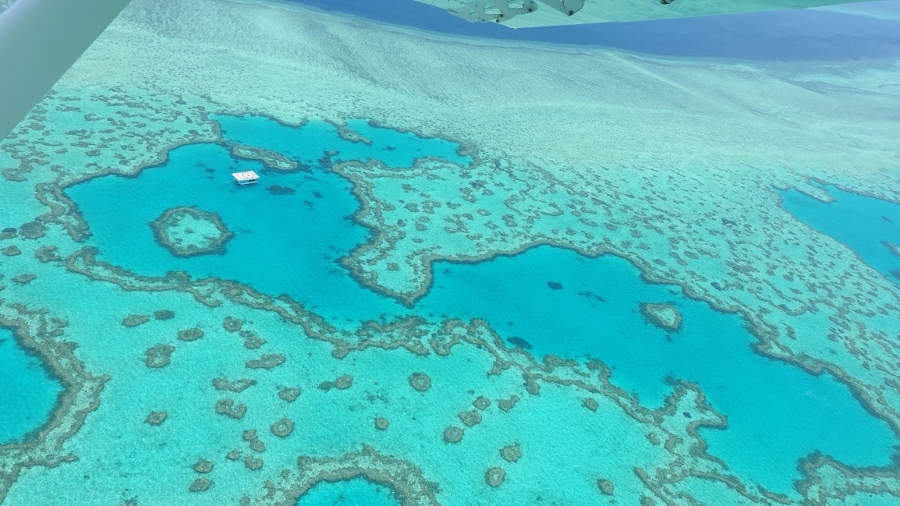 In January this year I’ve been lucky enough to see the Great Barrier Reef during my trip in Australia. I could have snorkelled there but I wasn’t comfortable under water and I was worried about hurting the fragile coral. So I did a scenic flight instead and saw it from above. It was probably the best way to appreciate how big this natural wonder of the world is. It stretches over 2,300 km!

David Attenborough talks about the impact of climate change on sea life in his movie A Life on Our Planet (hope you’ve watched it by now) and this is pretty alarming. The world’s largest reef system has lost half of its coral since 1995. They provide habitat for fish and other marine life, so if coral disappears it means sea life also disappears. Too much stress on these corals drives them to “bleach”, meaning they lose their algae which normally gives them their colour.

“We used to think the Great Barrier Reef is protected by its sheer size – but our results show that even the world’s largest and relatively well-protected reef system is increasingly compromised and in decline.”

You may think that the Planet warming up by only 1°C is not much… But according to an IPCC special report, 90% of the world’s corals would be wiped out if it reaches 1.5°C by the end of this century. How do we stop this path of destruction?

The Government can always put in place new measures to try and save the planet but it is not going to be enough… I personally believe the biggest part has to come from individuals. It’s the general mindset that needs to change. This is a list of ideas of what we can all do:

There are so many ways to contribute, I found a very good article from another blog here for example: 22 Ways to Save the Planet in 2020. On my end, I completely banned cow milk at home or products made with it. Various milk alternatives are so much better anyway that it makes it easy to replace. I reduced my consumption of red meat to once or twice a month only and prioritise fish more. I cook fresh products, from a farm or market whenever I can, and don’t throw anything away (it’s easier when you know what portion you need!). I include plant-based meals in my diet like Huel once a day. Since we moved in London, we don’t own a car anymore. This is not much but if it doesn’t represent a big sacrifice it should be done!

What is your way to contribute in this battle to stop hurting the planet?

Unauthorised use and/or duplication of this material without express and written permission from this blog’s author and/or owner is strictly prohibited. Excerpts and links may be used, provided that full and clear credit is given to this blog with appropriate and specific direction to the original content. Copyright © Big Girl Big City 2022.